Using Lifestyle Analysis to Predict the Use of Behavioral Health Services

During the last quarter of the twentieth century, behavioral health services emerged as an important sector of the US healthcare system. This umbrella term covered many conditions, including psychiatric problems, emotional disturbances, substance abuse, hyperactivity in children, and other conditions considered treatable by mental health professionals. Behavioral health services were considered to be in a different category from the treatment of physical illness, and a separate industry developed for the management of behavioral health problems. Many health plans carved out behavioral health services, and, eventually, national managed care plans specializing in such services emerged.
By the late 1990s, the primary purchasers of behavioral health servicesĂ˘â‚¬â€ťthat is, major employersĂ˘â‚¬â€ťwere facing growing financial pressure because of increasing healthcare costs. Behavioral health services were particularly problematic because of the open-ended nature of many behavioral health conditions. At the same time, however, regulations that mandated parity between physical health coverage and behavioral health coverage were being enacted. Employers who wanted to offer behavioral health coverage to their employees were faced with a major cost-containment challenge.
ABC Health Services was a major player in the behavioral health arena, reporting an enrollment of more than three million members in its managed care plans. ABC was faced with the same issue other behavioral health plans had to address: customers who could not distinguish between plans and were shopping for the lowest price. As a result, ABC was losing clients to other, sometimes less efficacious plans that quoted lower prices.
In response to this situation, ABC developed an innovative approach to the market using lifestyle segmentation analysis. On the basis of records maintained on enrollees who participated in its behavioral health plans, ABC believed the likelihood of using behavioral health services could be linked to certain lifestyle categories among employees. ABC also thought that the type and intensity of services used could be correlated with lifestyle cluster.
ABC subsequently profiled existing clients in terms of its Mosaic lifestyle clusters (see exhibit 7.4). It found that approximately a dozen lifestyle clusters (of the 60 Mosaic clusters at that time) were associated with a high propensity to use behavioral health services. Another ten lifestyle clusters were almost never associated with the use of these services. The remaining clusters did not appear to correlate with use or nonuse.
The cluster populated by middle-class suburban families tended to be characterized by high utilization levels, whereas the cluster populated by low-income rural families was characterized by low utilization levels. Furthermore, the older, affluent suburban household cluster had a high propensity for using alcohol abuse services but not drug abuse services. On the other hand, the single, affluent, urban, high-rise cluster had a high propensity to use drug abuse services but not alcohol treatment services. Some clusters were characterized by episodic use of services (e.g., in response to some stressful event), while members of other clusters were characterized by recurrent use of services, indicating deeper problems.
ABC was able to use this information in marketing its behavioral health plan to existing customers and prospective clients. ABC representatives offered to profile the employees of existing customers, for example, to determine the extent to which the package of services offered by ABC was meeting their employeesĂ˘â‚¬â„˘ needs. Profiling not only allowed ABC to more efficiently serve the existing client population but also helped the organization to predict future use of behavioral health services. The service mix could be subsequently adjusted to serve existing enrollees more efficiently and more cost-effectively.
To attract prospective clients, ABC distinguished itself from other behavioral health plans by determining a configuration of needs for the target group of employees. By serving in a consultative role, ABC demonstrated greater expertise than its competitors in managing behavioral health clients. Further, ABC could offer a package of services tailored to the needs of its clients, rather than the one-size-fits-all plans offered by other firms. By developing an in-depth knowledge of the target population using lifestyle segmentation analysis, ABC was able to provide more effective services at competitive prices while raising the satisfaction level of employers and employees.

Save your time - order a paper!

Get your paper written from scratch within the tight deadline. Our service is a reliable solution to all your troubles. Place an order on any task and we will take care of it. You wonâ€™t have to worry about the quality and deadlines

2. What are the implications of this irregular distribution for marketing?

3. Which sensitivities surrounding the marketing of mental health services should the marketer be aware of?

4. Does the fact that hospitals often lose money on mental health patients mean they should not market to the affected population?

5. Is this health problem one for which healthcare organizations might find social media marketing useful? 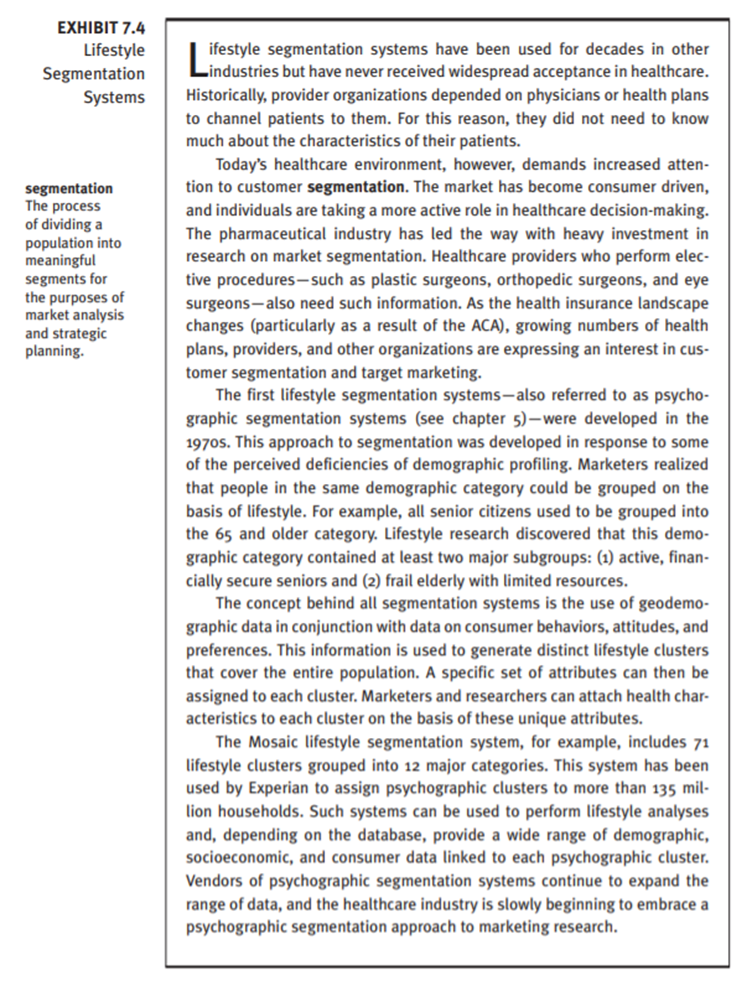 "Looking for a Similar Assignment? Get Expert Help at an Amazing Discount!"

Do you have an upcoming essay, dissertation or assignment due?

Now you donâ€™t need to worry about the deadlines, grades, or absence of ideas. Place an order on Besttutorshelp.com to get original papers for a low price.

Hi there! Click one of our representatives below and we will get back to you as soon as possible.

best tutors help Customer Support
Chat with us on WhatsApp